of foreign agent from Stepan Petrov

I, Stepan Petrov, Civil activist from Russia, Сhief of NGO Yakutia – Our Opinion  in Special Consultative Status with the ECOSOC of the United Nations am appealing to You to assist me.

I am a foreign agent (the explanatory note: the status was introduced by russian authorities for identification and control of dissidents).

Soon I will be charged for dissemination of information in Your social networking service Facebook.

After two administrative violations I could be tried in criminal proceedings.

So I can be imprisoned for 5 years by russian authorities.

I ask You to help me.

I appreciate Your contribution to global Internet industry.

You are known is an American media magnate, internet entrepreneur, and philanthropist.

I know that You support democratic values.

So I hope for Your assistance.

Let me tell You the fact of the matter.

A critical situation has arisen in with human rights and, in particular, with the rights of those who protect them.

Many independent human rights organizations are currently being unreasonably harassed. They are subjected to significant fines, restrictions on participation in public life and forced closure.

Russian officials staged a real terror against non-governmental organizations and civil society in .

Repressive laws and punitive law enforcement practices against the human rights community in are only getting stronger.

In recent years, a number of unlawful legislative changes have been adopted that restrict the activities of human rights organizations of and violate  international law, ethical and moral standards.

One of them is the Russian law on foreign agents.

According to this law, individual foreign agents must, at least once every six months, submit a report on their activities, including information on the purpose of spending money and using other property received from foreign sources. They are also required to indicate their status as a foreign agent, including when contacting government agencies, local governments, public associations or educational organizations.

In addition, there is a ban on serving in public service and local governments for individuals included in the foreign agent register. They are also forced to mark anything they write or share online (or in the mass media) with an obvious, inescapable notification that they have ‘foreign agent’ status in . Finally, the law also demands that these individuals create formal legal entities in order to report their earnings and spending to the government. Failure to comply with these requirements may incur administrative or criminal liability.

I, Stepan Petrov as civil activist and human rights defender, am being prosecuted for violation of the Russian Administrative Code which is that I did not publish notification on my ‘foreign agent’ status when distributing information in Facebook.

On October 12, 2021 an administrative case under article 19.34.1 of the Code of Administrative Offenses of the  have been initiated against me.

Before it I have become a foreign agent twice.

The second time I became a foreign agent, as the head of the legal entity "Yakutia - Our Opinion", on October 14, 2021.

Soon I could be a "Honored Foreign Agent of Russia".

My sequence numbers in the 's Justice Ministry register of foreign agents are 36 and 86.  The register is here https://minjust.gov.ru/ru/documents/7755

After two administrative offenses, criminal liability may arise under the article of the Criminal Code of the - Article 330.1. "Malicious evasion from the fulfillment of obligations stipulated by the legislation of the Russian Federation in connection with the recognition of a person performing the functions of a foreign agent". Jurisdiction belong to the 's Investigative Committee. Punishment may be up to 5 years' imprisonment.

So subsequent violations threaten criminal charges against me and I could be imprisoned by russsian authorities for 5 years.

Russan authorities (Roskomnadzor) accused me in failure to indicate the foreign agent's notification in 14 messages in FaceBook.

After entering the foreign agent's register , I voluntarily, in accordance with the law, put this notification on foreign agent

to all my main information resources in Internet.

Thus, I have voluntarily and conscientiously complied with the requirements of the law on placement of a foreign agent's notification.

According to clause 12 of the Procedure for placing the notification of the Order of the Federal Service for Supervision in the Sphere of Communications, Information Technology and Mass Media (Roskomnadzor) dated September 23, 2020 N124:

I have set a foreign agent's notification on all resources and it is in front of all my materials and messages.

I personally checked its presence several times in order to ensure strict observance of the law.

I believe that in this case it was the result of the ambiguity of legal norms and good faith delusion.

I, Stepan Petrov am not a specialist in the field of information and computer technologies.

I am an amateur computer user and have no clear idea of ​​how a computer works and how the Internet works.

For many technical questions, I turn to specialists.

Essence of the claims was the failure to indicate the foreign agent's notification in 14 messages in FaceBook.

Let's consider an example of one material (link)

I believe that the requirement of the law has been complied with.

At the time of publication, the foreign agent's notification was on my screen, as well as it is available when publishing on other resources.

But as it turned out, this foreign agent's notification was not visible on the computer screens of other Internet users. 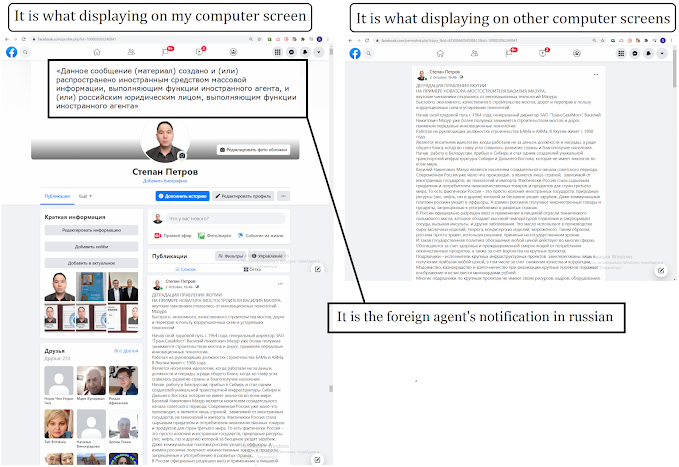 On other resources I put the foreign agent's notification at the beginning of the page and it appears in every material.

But FaceBook has its own technical nuances, which I, as not an expert in the field of information and computer technologies, did not know about.

I thought that the foreign agent's notification appears in all my materials and messages as well as on my other resources.

So I can conclude that there is no corpus delicti of an administrative offense, since I had no intent to commit this offense.

In this regard, It is necessary to stop administrative proceedings.

Mostly foreign agents are human rights defenders, civic activists and journalists with extensive experience, a circle of their readers and supporters.

They are the leaders of society. People listen to them and take their opinion into account.

In addition to the fact that they have many supporters and followers, they also have enough enemies who have power or money. Often, ill-wishers have both: power and money.

Therefore, in real life, there are many parties, except for the Ministry of Justice and Roskomnadzor, who are interested in creating problems for foreign agents.

The danger of the current situation lies in the unpredictability of course of events for each individual foreign agent.

Thus, corrupt officials can take advantage of the opportunity to inflict a crushing blow - “complex attack from all sides” against foreign agents - human rights defenders, civil activists and journalists engaged in anti-corruption activities.

One of the prominent foreign agents is the outstanding scientist, political and public figure Lev Ponomarev.  He made a significant contribution to the formation of the statehood of , its democratic institutions.

He was a deputy of the Russian State Duma, one of the founders of the Memorial human rights organization, various social and political movements.

In the photo: Lev Ponomarev and Stepan Petrov, 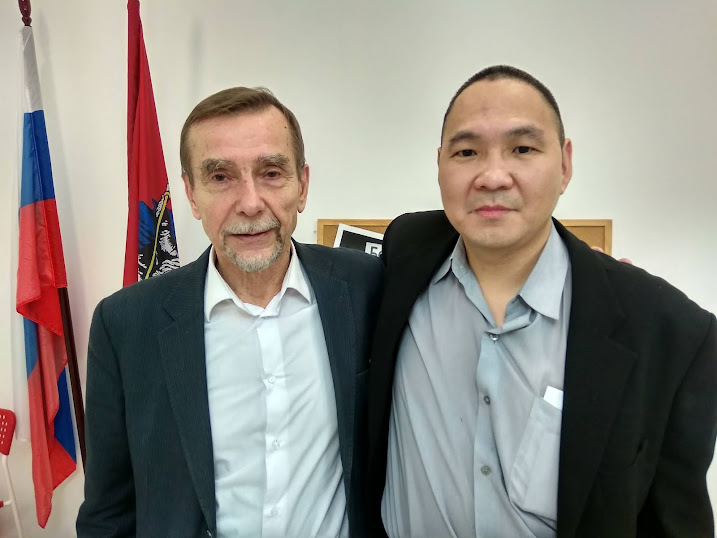 An administrative case was opened against prominent Moscow-based human rights activist Lev Ponomarev, the 80-year-old head of For Human Rights. Roskomnadzor accused him of failing to include the mandatory disclaimer that information was produced or distributed by a designated “foreign agent” on 20 Facebook posts, two Instagram posts, and 13 Twitter posts.

Another claim is failure to include the required text when he changed his profile photo on Facebook.

“I can see now that they are trying to make it difficult for me to be on Facebook,” Ponomarev told. “Even reposts have to be accompanied by the marking, which is complete nonsense. I most likely will stop reposting, but will write more complete posts instead of reposting. They are stimulating me to work more.”

He added: “I will not deliberately run into a criminal case, but if they do, then this is my fate”.

Russian authorities do not explain what to do in specific situations.

Ambiguity of legal norms would lead to increasing number of civil activists and human rights defenders brought to justice for violations of foreign agent’s law.

I have proposed russian authorities

to supplement the Procedure for placing the notification of the Order of the Federal Service for Supervision in the Sphere of Communications, Information Technology and Mass Media (Roskomnadzor) dated September 23, 2020 N124

with guidelines for placing a foreign agent's notification at the beginning of each message (material) on social networks and other Internet resources, such as FaceBook, Instagram, Twitter, etc., taking into account the specifics of Internet communication platforms and the need for their unambiguous explanation to foreign agents - Internet users who are not specialists in the field of information and computer technology,

and also taking into account the conditions when, for example, in FaceBook it is impossible to simultaneously add a foreign agent's notification when reposting any news or posting material in chronicle, news feed; in order to do it, person have to go to the "edit" option.

Based on the above

I, Stepan Petrov, Сhief of NGO Yakutia – Our Opinion ask You for the following.

1.) Develop a function for the Russian FaceBook and Instagram to automatically fill in a foreign agent's notification when distributing information specifically for Russian foreign agents.

3.) Ensure the participation of representatives of FaceBook - the Office for in consideration of my case under Article 19.34.1. of Administrative Code of the in the federal court in .